Chaos is in the middle of the biggest fight of his life and his carers are doing all they can to make sure he wins this tough battle.

The sick lion went through his first round of radiation for skin cancer on his nose at Muelmed Mediclinic in Arcadia on Tuesday.

In the incredible photos taken, the sedated lion can be seen lying on a gurney with his eyes, mouth and nose covered with white bandages. 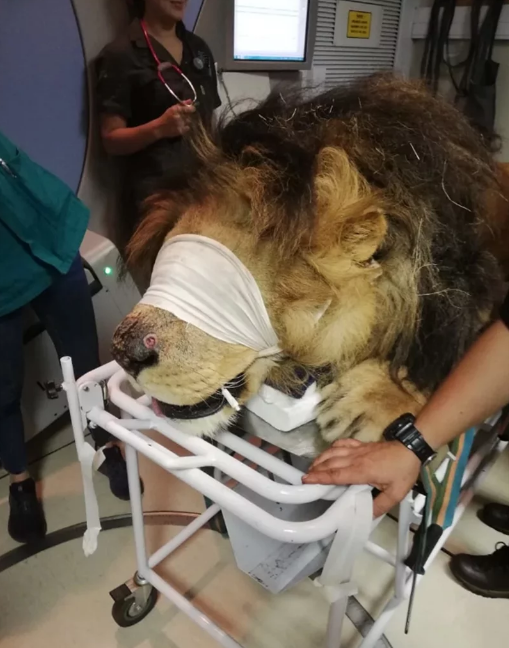 The 16-year-old lion was diagnosed with the disease back in April.

“After much deliberation, we decided to move ahead with the radiation treatment,” zoo manager Kara Heynis explained to the Rekord.

“Chaos was treated in Pretoria for his first session and will receive three more treatments,” she said.

Heynis told the Rekord that Muelmed provides top animal care and works closely with the Onderstepoort Veterinary Clinic in Pretoria.

“He’s like our child. Chaos is a big teddy bear full of love!”

The sick lion is loved by all of the zoo employees, she stated.

“He is a bit drowsy but he is doing well.”

According to News24, Chaos was treated by a team of five radiation therapists and one radiation oncologist.

Since the facility is a private hospital with human patients, extra precautions were taken to not put anybody in danger.

“There were no other human patients around while he was treated and he came into the hospital through a back door,” Radiation Specialist Hanri Reynolds told News24.

Chaos will continue his treatment next week.